Coming Spring of 2013...CLAWS OF THE GRIFFIN 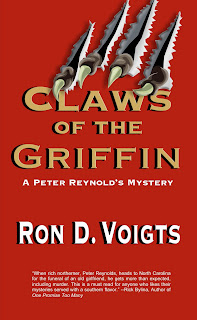 Diane’s death that initially looked like a home invasion gone wrong starts to look more and more like a planned murder. Then more people die and Reynolds finds himself on the trail of a ruthless killer whose next victim may be Diane’s son.

Claws of the Griffin is a roller coaster ride of mystery, mayhem and murder, Southern style.

Available in the Spring of 2013 from Cool Well Press. Ron D. Voigts also writes the Penelope Mysteries available from Amazon and Barnes & Noble.