Why Do I Write?

I’ve contemplated this question many times.  The desire to be a writer has been with me since high school.  But I went off in other directions until about sixteen years ago when I finally decided to do it.  It took me nine years to land a literary agent, fifteen years to get a book published (self-published) and sixteen years to find a publisher.  I ask myself if it is worth it.

My current work-in-progress is almost finished; I have plans to send it off to the literary agent in September.  So, last week I decided to take some time off.  Instead of plunking away at the keyboard for an hour or so in the evening after getting home from work, I’d do something else.  I watched TV, played some games on the computer and did some catching up on my reading.  The evenings seemed to go much slower, and I didn’t feel robbed of my time.

Then this weekend I decided to crank out a scene for the next book.  This is nugget of an idea that sat in the back of my mind for a long time.  Nothing could make it go away.  The characters, the places and the action demanded to be born. I worked for hours typing the one thousand twenty eight word scene.  Sometimes the words flowed like quick-sliver and my fingers could barely keep up. Other times I lingered over a phrase for minutes until it was just right.  When finished, I felt a great relief having wrought something stored away in my brain for many years.

I tussled for a long time, wondering why I do this.  Certainly it’s not for the money.  I could find other things to do with my time.  But the stories are locked inside my head and want to come out.  I can’t ignore them. And when they are finally on paper, I feel a great satisfaction.  Something that wasn’t before now exists.

Stories we’ve read from Charles Dickens, Edgar Allen Poe, Stephen King and a million authors live on inside of us. Something that once resided only in one person’s imagination, now lives in the minds of others and becomes a part of them. I write to share with others what’s been a part of me. 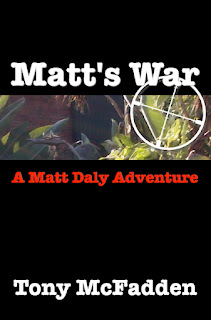 “Matt’s War” is the first book I wrote. When I started it I was working for an Engineering Consulting company in Singapore. An online colleague (who I’ve never met but would like to thank if I ever e-meet him again) said (wrote, actually) that “it should write itself, an engineer traveling all over Southeast Asia, the hotbed of terrorist activities.” It didn’t actually write itself (they never do), but the rough premise intrigued me. After a dozen or so re-writes (and a master-class lesson in story structure from Larry Brooks) it was finally born, about three years after I started.  The Blurb:

What if an Engineer got caught up in terrorists' plans, against his will? All Matt Daly wanted to do was keep his head down, stay out of trouble and run a moderately successful business. His waking hours were spent building his telecommunications consulting business in Asia-Pacific -- until he interrupted a hijacking on a flight from Singapore to Sydney, Australia. Other people have plans for him now, and his life will never be the same.  Now hundreds of lives depend on Matt's actions in this international thriller spanning Malaysia to Australia, and north to Taiwan.


Covers are the first things that get seen when book shopping. Can you tell us about your cover’s design?

I was sitting in traffic here in Sydney beside a plant covered median. A metal box was barely visible – probably traffic light controls. I snapped a couple of shots with my phone, added the black mask to make it look like the view through a slot window and stuck a sniper scope overlay on it. I’m sure many could do better, but it was my first and it seems to get the point across.

For me the first few paragraphs tell me if I want to read the book. How does your story open?
Matt and George are on the Singapore Airlines flight to Sydney. It has already taken off and they are settling in for an eight hour flight. Then four terrorists attempt to take control of the plane. By the tenth paragraph the hijacking has started.

How have you been marketing your book? What works best for you?
To be frank, marketing has been minimal. I’ve pushed a bit of freebies on Smashwords and blurped a bit on Twitter about it, but not much more than that. I read somewhere, while writing my second book, that the best sales tool is a good back catalog. Because I have a paying job for the paying of the bills I can afford to build up that catalog for the next couple of years without getting too freaked out about sales numbers. When I have somewhere between 8 and 10 books available I’m going to take a year or so and try to crack the marketing/visibility nut.
What are you now working on? Can you give us some hints what to expect?

Number six. Coincidentally (not) a sequel to “Matt’s War” called “Daly Battles”. I’m about two and a half chapters away from finishing the first draft. The book will be available sometime in late September. In this adventure, Matt and George have traveled to North Korea, intending to capitalize on the apparent modernization Kim Jong-un is pushing. While there, though, they get caught between a military coup and a Burmese Spring type revolution. And Kim Jong-un’s modernization plans are actually a front for something a lot more sinister.

When you are not writing a book, what do you do for fun?

When I’m not writing, I’m planning the next one. I started late. I’ve got a lot of catching up to do.

Tony McFadden left Canada two decades ago and has spent the bulk of the intervening time consulting for wireless operators throughout South East Asia. Now enjoying the relaxed lifestyle of coastal Australia he has embarked on a second career, writing suspense and thriller novels.


Check out Matt's War at Amazon and Smashwords. For the rest of July down load the book for free at Smashwords.  The code is posted on the page under the price.
Posted by Ron D. Voigts at 8:48 PM 3 comments:


I’m a sucker for Templar Knights, so the cover of Devil’s Lair by  David Wisehart grabbed my attention immediately.  I began reading and found myself hooked.  Beside the excellent writing, I love a good quest.

Four of the most unlikely characters have taken upon themselves to travel to Hell and retrieve the Holy Grail. William of Ockham, a Friar Minor, excommunicated by a heretic pope and hunted by the Inquisition, leads the band of misfit characters. Accompanying him are Giovanni Boccaccio, a poet accustomed to fine clothes, good food and the company of courts, and Nadja, an epileptic woman with the power of second sight. Along the way they collect Marco de Roma, a knight who has lost his memory and his purpose. The journey leads them on an adventure that takes them through the nine levels of suffering located within the Earth to meet with the ultimate villain, Lucifer.

I liked this book for so many reasons.  The writing is rich and detailed.  The quest is a noble and ranks with the great ones, like the Iliad, and the Odyssey.  The story is laced with well-known characters from history and practical wisdom. I give this book a big five thumbs up.