Book Review: The Night Is Alive by Heather Graham


I catch my reads when I can. Lately I get my books via audio recording while on the go. This past week while on a road trip, I caught The Night Is Alive by Heather Graham. I have a soft spot in my literary heart for paranormal mysteries, mainly because that is what I like to write, so this was
up the proverbial alley (a cliché I never quite understood). 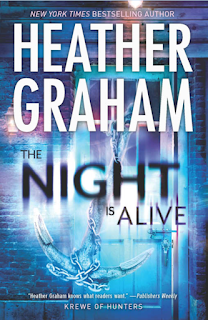 The Night Is Alive centers on Abigail, freshly graduated from the FBI Academy, who comes home to Savannah for the funeral of her grandfather Gus Anderson. Things about his death look suspicious. Gus owned the Dragonslayer Inn, which was haunted by pirate Captain Blue Anderson. She’d seen the ghost before and now his leads her down to a hidden tunnel below the inn where grandfather was found. She contacts a paranormal investigativing team within the FBI and they send Malachi Gordon, a consultant to the FBI and psychic investigator.

A killer is kidnapping women, cutting off their left ring finger and tossing them the river, where they turn up drowned.  Abigail suspects a connection between her grandfather’s death and the women’s murder, and with Malichi’s help they follow the clues and some back up from some ghosts. A spark of romance develops between the two as they rush to find the killer before another woman dies.

This is a classic mystery with a few spooks thrown in.  I had hoped for a haunting, perhaps a Wooooo! Or a cold draft or two would have been fun, but the ghosts are just like other people, albeit visible only to Abigail and Malachi.   As it a murder mystery, it kept me reading, er listening.  This happens to be Book 10 in Krewe of Hunters series, and I don’t plan to read the first nine. Perhaps I am missing the big picture, but for now I’ll give this one 3-1/2 thumbs up.
Posted by Ron D. Voigts at 8:54 PM No comments: