CLAWS OF THE GRIFFIN Due Out March 21 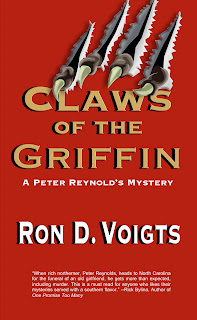 Claws of the Griffin  is due out March 21 from Cool Well Press.

Says Rick Bylina, author of One Promise Too Many:
"This is a must read for anyone who likes their mysteries served with a southern flavor.”


When an old girlfriend comes back into my life, things never go well—but when she’s also dead, they go horrid.
My current girlfriend Ivy kicked off her shoes and dropped them by the front door.
She pulled out a barrette, shook her head and loosened blonde tresses that fell to her
shoulders.
“You can’t keep calling me at work and having me paged every half hour. People are
starting to talk.”
“I can’t help it if I’m in the mood.” I slipped my arms around her waist and pressed
my lips against hers.
She tried to talk while I smothered her face with kisses. “Peter, you need a hobby.
Maybe you can start another company. Or collect stamps.”
“I just sold my company. Why would I want another headache?” I moved my mouth
closer to her ear. “You’re my hobby.”
My fingers had glided across the front of her blouse and undone a button when the
phone rang. I nuzzled her neck and took in the sweet scent of her skin while releasing
another button. After the third ring, Ivy slapped my hand and pushed me away.
“Aren’t you going to answer it?” She buttoned her blouse and smoothed its fabric.
I hit the speaker button. “This better be good.”
“Mr. Peter Reynolds?” a deep voice said with a melodramatic tone.
I hesitated, used to sales pitches and requests for donations from benevolent
associations to save whales, take care of widows and orphans, and free my soul from eternal
damnation.
“Yes.”
“You are Peter Reynolds of Bamboo Imports?”
With her chin tucked in and her mouth puckered, Ivy did a silent imitation of the
man speaking.
“Look, if this is business, you need to call my office.” I omitted telling him that I had
sold my company two months ago and for a tidy sum.
“It’s not business, Mr. Reynolds. I'm only making certain that I'm speaking with the
correct Peter Reynolds.”
“Well, you have the right guy.” The call had become irksome now. “Unfortunately, I
don’t know who you are.”
“My name is—.” The caller gave a low grunt. “I guess right now that doesn’t matter. I'm
calling about Diane Cottwell.”
Ivy’s eyes narrowed. She was about to say something when I held a finger to my lips
and signaled her to stay silent.
“Yes, I remember her.”
“She died last week.”

If you haven't checked out the book blog Bittersweet Enchantment, you need to.  Besides being a great place to get reviews and low down on YA Books, my daughter Beckie runs it.  And she's doing a great job!

She's built the site one follower at a time, doing reviews, author interviews and telling what's happening in the book world of YA lit.  Her reviews cover the full range of books from self-published to big name authors.  Her interviews are witty, charming and informative. There's always something happening, and a book giveaway going on most of the time.

Kudos to a great site.  Check it out. Enter a drawing at Bittersweet Enchantment.

A TV series that has captured my attention recently is Being Human from the SYFY channel. The storyline centers around three roommates living in dreary house in Boston.  Aidan is a vampire who has turned his back on his former lifestyle, and most times he is not too successful. Josh, the werewolf, fears for the safety of those he loves when a full moon arrives. Sally, a 23 year-old ghost, longs for the life she had before being murdered. They all have one thing in common—a desire to be human. The story examines a larger theme of the monster in us--coping day-to-day, putting on a face that says everything is all right, when it’s not, and what to do when you fall down.

Monsters fill the news.  A man kidnaps a small boy off a school bus.  The leader of a country wages a war against its citizens. AA father kills his family. An inmate serving a life sentence injures a guard and escapes. Monsters are always with us.

Things aren’t black and white.  The good guys don’t wear white hats and the bad, black.  The job of a writer is to explore the gray, seeing the good and evil in everything.  Our heroes have black marks on their hearts. Our villains reach out for understanding. The books we write are made of the monsters we create.