Blog Hop: Claws of the Griffin

I'm honored to be chosen to be part of this blog hop, and I'd like to thank Rick Bylina for tagging me to participate. This gives us all a chance to view new releases from authors we admire as well as introduce us to some works in progress.

Here are my answers to the ten questions:

Q. What is the working title of your book?

I originally had named the book A Small Town Murder that takes place in a North Carolina town about 30 miles south of Raleigh. The family where the murder takes place came from aristocracy dating back to when the Carolinas were part of the colonies.  Their coat of arms was a Griffin with its wings outspread and talons extended to attack.  Suddenly the title CLAWS OF THE GRIFFIN  hit me.

Q. Where did the idea come from for the book?

I’m a transplanted northerner living in the south, so it struck me as a great premise for a mystery story.  I envisioned a rich Midwestern guy coming to the South and experiencing things never found in the North.

Q. What genre does your book fall under?

Mystery with a southern flavor.

Q. Which actors would you choose to play your characters in a movie rendition?

For the main character, I’d have Matt Damon play the part of Peter Reynolds.  He strikes me as the actor that could pull off the part of the reluctant hero. I can see Donald Sutherland playing the backwoods moonshiner, with a scraggly beard and disheveled beard. For the sociopathic killer, my pick is Tom Hiddleston who played Loki in the movie Thor.

Q. What is the one-sentence synopsis of your book?

Rich northerner Peter Reynolds finds himself stuck in a small North Carolina town as he outwits a moonshiner, a sly southern business man, a scheming country boy and a seductive southern belle to find who killed his ex-girlfriend.

Q. Will your book be self-published or represented by an agency?

Claws of the Griffin, due out March 2013, will be published by Cool Well Press.

Q. How long did it take you to write the first draft of your manuscript?

Q. What other books would you compare this story to within your genre?

Q. Who or What inspired you to write this book?

Living in the small town of Fuquay-Varina, North Carolina, gave me the idea.  Things are different out in the country.  I kept thinking what a murder mystery would be like in the setting.

Q. What else about your book might pique the reader’s interest?
Besides being a murder mystery, the story is about family.  Peter Reynolds starts out being a rather shallow person who only thinks about himself, but before it’s over he will…well, I don’t want to give away too much.

On November 7, my dear friends will be answering the questions about their fabulous books. So for a treat, hop over and visit them...or, you can go visit them right now.
Joleene Naylor

I hear the music, but don't know the words yet


When I start writing a new novel, the inspiration does not just appear like magic.  Oh, the story is in my head.  I may know how it ends.  I have written some beginning chapters, but things don’t seem right.  The feeling isn’t there. The darn story is churning away in my brain, but I just cannot get it out on paper.

Writing is not hard but getting it right is.  Creating conflict.  Ending chapters in cliff hanger.  Developing characters that the reader can love or hate. These are the challenges of writing.

My latest story that just went off to the literary agent began at the end of 2010. I envisioned a college professor, working with an eccentric young man, enlisting him to solve a crime.  I wrote the scenes and let my writer friends read them.  The feedback was good, but I didn’t like it. Not edgy. Almost 10 months elapsed before it all came together.  I threw out the first drafts and started anew.  This time it was an unscrupulous opportunist taking advantage of the disturbed young woman to solve a murder.

My next story plays out in my head like a song.  I can hear the music and hum along.  Just haven’t gotten the lyrics right yet.

How do your stories begin?
Posted by Ron D. Voigts at 9:10 PM No comments:

Interview with Kfir Luzzatto co-author of HAVE BOOK, WILL TRAVEL 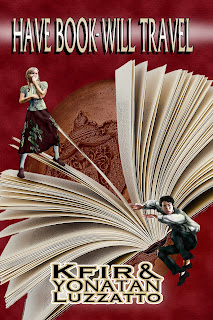 A book blurb tells a lot about a book. Can you tell us something about your book?
Max fears that his family will disapprove of his friendship with Darla, a common girl from the village outside his uncle’s fortress walls. That's why they meet secretly to read together from an old book, which she has found in a dusty room near the fortress laundry where she works.

They read about a lost lake and feel adventurous when they slip out of the fortress to go swimming there; but the trouble begins when they find that, in the meantime, the fortress has been sealed and they can’t get back in. It’s lucky that they have the book with them, to guide them through the many dangers that await them on their way back home…or perhaps it is the book that is the source of their troubles.

In the end, it is the power of the friendship that Darla and Max have forged, and their courage, that see them through a series of breathtaking adventures.

Covers are the first things that get seen when book shopping. Can you tell us about your cover’s design?
The cover of this book was designed by Laura Givens, who is a gifted digital artist with whom I worked on two other covers. It reflects the central idea of the story well, putting the book and the two young protagonists at the center of the composition. Laura came up with a basic idea and my son (and co-author) and I made suggestions for changes. We went through a few versions until everybody was satisfied.

For me the first few paragraphs tell me if I want to read the book. How does your story open?
The endless winding corridors, carved into the lower part of the fortress, opened into large voids that functioned as storage rooms. They were badly lit by small, high windows, and damp, and Max had equipped himself with a lamp that shed vivid light around it. Some of the rooms contained old furniture; another was filled to the high ceiling with parts of armatures. The room that Max liked best looked like a huge junkyard, filled with boxes, old bags and packages, each of which contained items of interest, and was so huge that Max could have spent weeks exploring it.

As he was about to enter the room, one day, a noise coming from within startled him. A light flickered from the direction of the noise and quickly disappeared, leaving him to wonder whether it had all been a dream. He turned off his lamp, took off his shoes to avoid making a sound, and walked silently in. A light came from the far end of the room, behind a pile of boxes. It was faint but clear and Max walked quickly toward it. Peering behind the boxes he gaped in surprise. A young girl sat on a large wedding-chest, reading a book.

“Hey,” said Max out loud, taking a step forward. He was so close to her that he could have touched her.

The girl jumped to her feet, closing the book and hugging it to her chest. “You scared me!” she complained.

But, wait! We’re moving too fast. Let’s go back to where it all started…

How have you been marketing your book? What works best for you?
I don’t think that a single magic solution exists, which works for all books. However, I am sure that obtaining independent, sincere reviews is a must for every book, so I concentrated my efforts on book reviewers. I was a bit outside my element here, because this is my first middle grade/YA book, but I received a good response from bloggers and that worked well for me. There is a lot more marketing of this book in my future, though.

What are you now working on? Can you give us some hints what to expect?
Since releasing HaveBook, Will Travel, I published an adult drama, An ItalianObsession, and right now I am working on a techno-thriller (my favorite genre) titled ExtraLife, Inc., due for release in the first half of 2013.

When you are not writing a book, what do you do for fun?
I’m a family person so I spend much of my free time with my wife and (now grown-up) kids; traveling and music play a big role. A pianist since early childhood, I’ve been struggling for the past ten years to learn the violin, with fun being had by all involved (and sweat and tears too.) And then, of course, there is reading. A lot.

Kfir Luzzatto was born and raised in Italy, and moved to Israel as a teenager. He acquired the love for the English language from his father, a former U.S. soldier, a voracious reader and a prolific writer. Kfir has a PhD in chemical engineering and works as a patent attorney. He lives in Omer, Israel, with his full-time partner, Esther, their four children, Michal, Lilach, Tamar and Yonatan, and the dog Elvis.