Interview with Shiela Stewart on her latest Book Seducing the Darkness 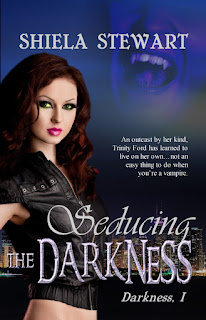 I would love to. I always struggle with the blurb. It has to be something that will draw the reader in without giving too much away.

An outcast by her kind, Trinity Ford has learned to live on her own..not an easy thing to do when you’re a vampire.

Trinity was once a fragile girl. Being taken by a powerful vampire prince changed her, Discovering him in the arms of another  woman changed destiny. Alone, she’s earned fast how to be tough, how to survive, and how to protect the people of her city from the evil that lurks in the dark. She was managing just fine, until Basil walked back into her life.

Basil Hawthorn has been the reigning prince of vampires since banishing his father to the Realm of Dark Mystics decades earlier, When a perfect dream makes him realize Trinity is at risk, he decides the only way to save her is to push her away. Doing so is not easy. Trinity is the only woman he has ever loved, ever will long and he can’t seem to let her go.

When rumors arise of a place to raise the king ad blot out the sun, both Trinity and Basil know they must do everything to stop it. Even if it means working together. Despite the betrayal and the threat, they find themselves drawn to each other. Love has no boundaries, especially in the face of danger. But will they be able to stop the ritual before it's too late?

Or will the darkness capture them both.

Covers are the first things that get seen when book shopping. Can you tell us about your cover’s design?

I wanted three things for my cover. A city in the dark, something that told the reader its a vampire series and the heroine or heroine and hero together. The artist took what I wanted and went with it. I really like the cover and I look forward to see the other covers when they're done.

For me the first few paragraphs tell me if I want to read the book. How does your story open?

Jacob’s Cove, 2015
2 weeks before the total eclipse of the sun

That damn itch between her shoulder blades was driving her nuts. It had started about a week ago and hadn’t let up. It wasn’t the kind of itch that warranted scratching, but the kind that nagged at you from the inside. The kind that told her there was bad news in the air. She just didn’t know when it would happen.

Rolling her shoulders, Trinity headed to her office. The sun was setting, and she had approximately two hours before she had to head out into the night. With her favorite black mug in hand, she sat down at her computer and booted it up.

“Hello, sexy. How may I service you today?” the strong, male voice retorted from the computer.

How have you been marketing your book? What works best for you?

I've tried a lot of things. Blog interviews and spots are a big one. I've placed my covers on popular blogs such as Long and Short Reviews and always find it brings me sales. In the past, I've payed All Romance eBooks to place the cover of my book in their magazine as well as in The Romantic Times magazine. Getting my name out there in any way possible is helpful which include being on Facebook and Twitter.

Raised on a rural farm in Saskatchewan, Canada, Shiela Stewart relied on her vivid imagination to fill her days. Never did she realize that her need to tell a story would someday lead to becoming a published author.


In the fall of two thousand and six, Shiela published her very first book and she hasn’t stopped since.
When not writing, Shiela spends time with the love of her life and biggest supporter, William. She enjoys doting on her children and granddaughter. She has a strong affection for animals which is evident in the five cats, one dog, plenty of fish and one turtle she owns.

Some of her other passions are home décor, crocheting and knitting.

Where to find Shiela: