Penelope and The Birthday Curse
On Sale! 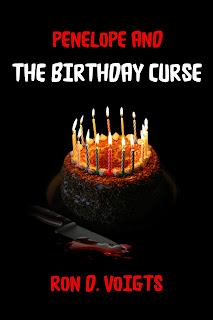 Sometimes birthdays can be deadly

An isolated mansion in the country...stranded in a snowstorm...someone is murdered on Penelope's birthday.

But who did it?

A young fortune teller weaves a tale of a gypsy curse where three people will die. And it happens on Penelope's 13th birthday. While the adults bumble along, trying to discover the killer, Penelope sleuths with the help of her friends to find the culprit. It's a race against time before Penelope becomes the third victim.Penelope and The Birthday Curse weaves a mystery with madcap characters, who-done-it clues and non-stop action that's a fun read for the whole family. The story is full of humor, suspense, and mystery that will keep the reader guessing until the very end.

Only 99 cents. November 23 through December 1

SMASHWORDS USE COUPON ON PAGE
Posted by Ron D. Voigts at 10:54 AM