Book Review: The Light of the Fireflies by Paul Pen 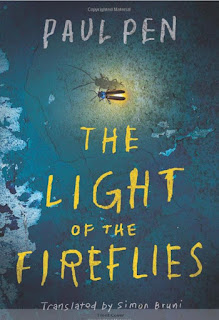 The Light of the Fireflies by Paul Pen is one of those freebie books you get with a Prime membership on Amazon. Usually, I gravitate toward something more in the realm of mystery, suspense and paranormal, but this story grabbed me because of the premise.

The tale starts from the point-of-view of a young boy, I am guessing about five or so, living with his family in a basement.  This is the only world the child knows having been born and raised there. Immediately we realize the family is dysfunctional bordering on outright bizarre. Everyone, except for the boy, has scars from a fire that happened sometime before he was born; his sister, in fact, is reported to be so hideous that she wears a mask. So many other aspects of this family are revealed in the book’s first part that the reader is left wondering, how this all came about.

Part two of the story goes back to before the family lived in a basement, before the boy was born.  Even then the family is weird and disconnected within itself. I won’t give anything away here, but suffice it to say, the story seems more contrived in the second half.  While the first part is character driven and seen through the boy’s eyes, the next part is plot oriented with jumping from point-of-views. At times, I was not sure whose head I was seeing the world.

The second half takes the reader on a journey of explanation how everything came about.  It paints a picture of the circumstances behind everything and how a family comes to live in a basement, carrying scars from a fire and emotional scars. Like sand shifting in the dessert, things change what the reader believes to be the final truth to something else. Only the story’s end reveals all and ties up loose ends.

I give the book a three-star rating. I liked the premise and how this story came about but felt the explanations lacked some believability.  Still if you start the reading and like what you see, you’ll find the read worthwhile. Check out The Light of the Fireflies at Amazon
Posted by Ron D. Voigts at 4:34 PM