Review of My Clockwork Muse by D.R. Erickson 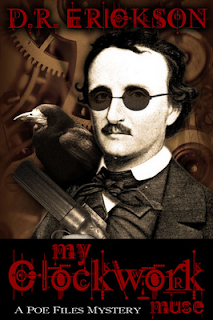 What does Edgar Allan Poe, zombies and steampunk have in common? If you looked at the cover for this book review, you know the answer. My Clockwork Muse by D.R. Erickson.  I’m an Edgar Allan Poe fan and definitely interested in steampunk. If you not sure of what that is, think Jules Verne meets Goth in an alternative history.  Personally, I have my own top hat, ascot and frock coat that looks as if I stepped out of Around the World in 80 Days.  Regarding zombies, I can go with the flow.

In My Clockwork Muse, Edgar Allan Poe finds himself in a tale right out of his own imagination, only he’s not writing it. Murders have been committed copying his stories like A Cask of Amontillado and The Murders in the Rue Morgue. Witnesses to the dastardly crimes seem to think the murderer looks a lot like Poe.  Only, he doesn’t remember anything.  The storyline is woven around real life events in the author’s life and would not be complete without a wise-cracking Raven and love interest named Olympia. The finale leads to one of Poe’s  most ingenious mechanisms for death.  But I’ve said too much!

The style reminds me of Poe’s works, but still reads well.  The story takes more twists and turns than a coiling boa.  The characters are wild, whacky and captivating. Most important, My Clockwork Muse is entertaining and hard to put down. I give it a hardy four thumbs up.
Posted by Ron D. Voigts at 12:08 PM